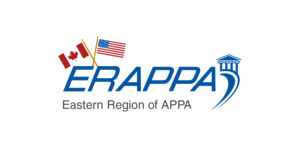 The selection of recipients is based on the following criteria, listed in relative order of priority.

The selection of recipients is based on the following criteria, listed in relative order of priority.

Emeritus membership in ERAPPA is a high honor that is only granted to retirees who have made a significant contribution to ERAPPA, its chapters, and the facilities management profession. Emeritus membership has been designed to recognize and express appreciation to distinguished retired members for their contribution and commitment to the region.

ERAPPA Rising Star Award- The Rising Star Award is designed to encourage further participation in ERAPPA among those who have already made significant contributions in the region or chapters. The award recipients are chosen by the ERAPPA President, Past President, and President-Elect.

To be eligible for the Rising Star Award, nominees must meet the following criteria: Employee of an APPA member institution for three consecutive years. Active participation in meetings and other functions of the Association. Demonstrated significant and/or continued service to the association through one or more of the following: Service/contributions/accomplishments at an international, regional, or chapter level.  Service/contributions/accomplishments as a member of an official APPA Committee, Program or Task Force, etc.  Service/contributions/accomplishments as a member of an official APPA training program or special project. Authorship of a publication, article, or chapter for APPA or presentation at an APPA annual meeting or educational program.

Other voluntary contributions of time, effort, resources, and leadership abilities to promote and enhance APPA and the educational facilities management profession. Have been nominated for the APPA Pacesetter Award. Members may only receive this award one time.

ERAPPA Chapter Champion Award- This award is to recognize an individual or an institution for their participation and support of the organization at any or all levels. It will be awarded annually selected from nominations made by the Chapter Presidents.

The criteria for this award are flexible to allow recognition for participation in a number of ways.

The Norman H. Bedell Award was created in 1996 by ERAPPA to recognize the contributions of

Norman H. Bedell who served APPA, ERAPPA, and KAPPA as International Vice-President for Professional Affairs, Regional Officer and President, and Chapter Founder and Treasurer. Norman demonstrated a unique blend of dedication and tenacity coupled with a sincere love for and belief in people. This award memorializes his contributions by recognizing another member who has served with distinction and exemplifies the leadership qualities of the late Norman H. Bedell.